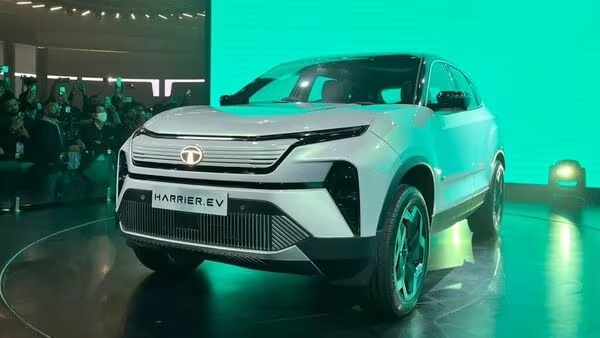 Now we talked about the exterior of Harrier EV, the Harrier EV looks similar to the current generation of Harrier, but some differentiated as an EV. In a front, it carried the same headlamps design, but it gets a new LED light bar, there are also a new blanked off grille and redesigned front bumper, flush door handle. At the rear, It’s quite differ by the tail lamps assembly with a new LED light bar running the width of the tail gate.

From Inside,much of the equipment list will be largely the same as available with currently models. Some key features are added panoramic sunroof, wireless charging, Apple Carplay and Android Auto, Ventilated front seats. It is expected that Harrier EV could get a large infotainment system.

Tata didn’t reveal exact battery capacity or electric motor specifications, the company only mentioned that it will comes with a dual-motor and all-wheel drive set up. But as a report, It is expected that Tata Harrier EV can have a battery pack of around 60kWh, and targeting a range of around 400-500 km. The Harrier EV will also feature vehicle-to-load charging capacities. Charging options could be offered as Nexon EV, albeit in higher capacity. There will be the standard home charger that could support to any 15A socket and DC fast charging station.

The MG Motor India is preparing up to introduce an updated version of its most selling car New Hector facelift in India market by the end of 2023 and has started to reveal the updated SUV.

The company had teased its long 14.0 inch vertical touch-screen infotainment system in the last month and claimed it will be the biggest touchscreen in any car ever, and the now MG MOTOR teased a new image giving us an idea of cosmetic change in the Hector’s front end. About the front updated SUV’s design, hinting at re-styled front bumpers and tweaked headlights.