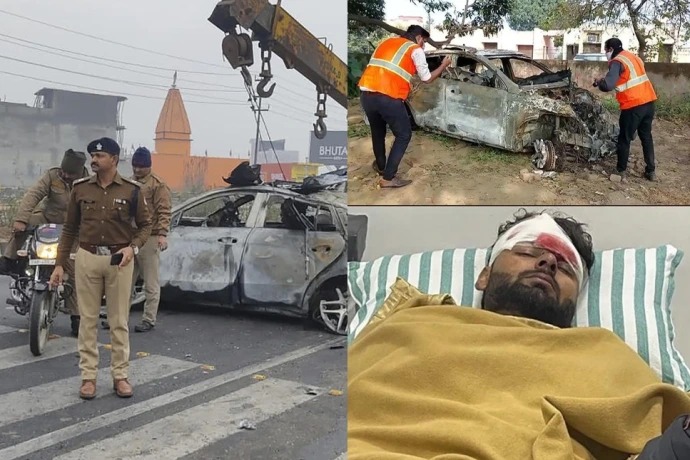 The Star cricket Rishabh pant suffered a massive car crash early morning on the Friday morning and currently admitted in a hospital of Dehradun Pant wan in his Mercedes car,which met with an accident new Roorkee. Pant injuries after his car collided with a divider and ball caught in fire while he was travelling from Delhi to Roorkee. The BCCI has provided an update related to her health condition.Pant has two cuts on forehead and a ligament tear in right knee but currently situation is stable, read a statement from BCCI.

India wicket keeper Rishabh Pant met with car accident early morning on Friday morning near Roorkee, Uttarakhand. He was admitted to Saksham Hospital Multi-specialty and Trauma centre where he was treated for injuries. Rishabh has two cuts on his forehead,a ligament tear in the right knee and has also hurt his right wrist,ankle toe and has suffered on his back the BCCI statement read.

Rishabh’s condition remain stable,and the has now been shifted to Max Hospital,Dehradun, wherehe will undergo MRI scans to ascertain the extent of his injuries and formulate his further course of treatment.
Director General of Uttarakhand police, Ashok Kumar,has confirmed that the cricketer was alone in the car at the time of the accident and broke the wind screen to escape from the car after catching fire.

He had played a big role in the Indian team second successive Test series victory in Australia in 2020/21. pant has been India’s regular wicket keeper across all formats after MS Dhoni’s retirement and has been on le one of the Indian’s top performers.

Another police officer, privy to the accident while informing about the possible reason behind the accident,told TOI requesting anonymity said that,”It is likely that Pant fell asleep while driving because there was no fog on the road which could have affected the visibility. “The charred car has been taken away for further investigation. It is not known whether nothing is left inside to verify that . A probe is on, “said the officer.