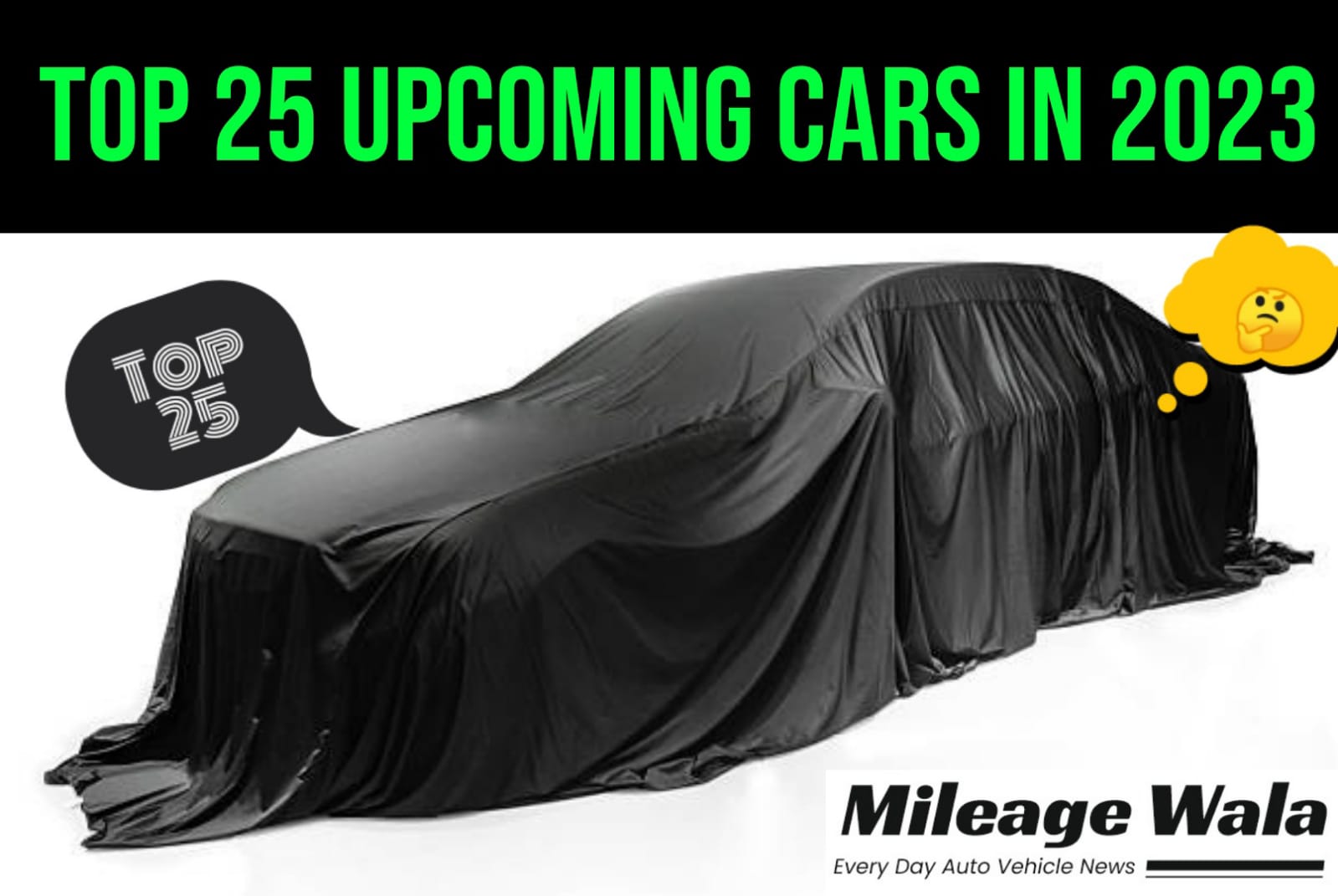 Talking about the price, the price of the upcoming Mahindra XUV400 is expected to range from Rs 15 lakh to Rs 20 lakh. It will compete with Tata Nexon EV, MG ZS EV.

In Updated New MG Hector beyond the cosmetic updates, Its will get the Next level two 2 Advanced Driver Assistance system (ADAS). It means, that it get active safety features such as lane keep assist, blind spot detection rear cross-traffic alert forward collision warning system and etc. It is likely that the refreshed SUV will house the ADAS sensors and camera on the windscreen.

It is available with a 2.0 liter diesel engine as well that develops 167bhp and 350Nm torque. This engine comes mated to a 6-speed manual transmission only. 25 Coming Cars 2023 In India Know Price – Specs

Recently Toyota Japanese based company has launched the new premium sedan of the new generation of Toyota Yaris Ativ. The new sedan is designed with the new philosophy. The 2023 Yaris Ativ is offering based on the DNGA platform for the Asian markets. It also available in mild and strong -hybrid technology which provide better fuel efficient engine.

It is available in four variants :- Sport, Smart, Premium, and Premium Luxury. It is also gets a new exterior design, and massive updated in interior design and features loaded and strong powertrain option. It is comes with 1.2L NA petrol engine.

Toyota has massive success in the Indian market with its highly selling SUV Fortuner and in MPV segment most comfortable car Toyota Innova. This seems to continue with the next-generation Toyota Innova Recently Toyota Innova Hycross was spied ,giving us a glimpse of its interiors. According to recently spy video shows an all- black cabin theme and a free- floating touchscreen. The new-gen will come packing ADAS features in addition to several new premium features list including a panoramic sunroof.

Launch:– The Innova Hycross would make its debut in November and will go on sale in 2023.

An all-electric Mahindra SUV has been in the making for quite some time, and a glimpse of it was showcased at the 2020 Auto Expo, when an electric KUV was put on display. Several reports had indicated that this XUV could be a subcompact SUV, which might get an electric powertrain first. This has now been confirmed.

Mahindra will launch the all-electric variant of its XUV SUV in early 2023. Talking about the powertrain, Mahindra’s XUV400 is expected to come with two battery options. Apart from this, high density NMC cells will be used for better driving range in the SUV. One can expect the XUV400 to offer a claimed range of 350-400 km on a single charge.

A big news for Mahindra Bolero Lovers Mahindra has updated the Bolero and changed it to a new look. Along with the look, the Bolero has also been updated. Mahindra is going to launch it very soon in the Indian market as SUV 2022 Bolero, with a slew of new features.

Mahindra’s new look is even surpassing the Thar. This new SUV has been spotted on South African roads several times during testing, many other features have been unveiled, according to the information Mahindra Automotive will launch the Bolero in May and June 2023 while the company’s Haven’t received any information from the side yet.

Mahindra is extensively testing the 5 door version of the Thar. The thar was recently caught on exclusive video. Spotted on road tests quite frequently in recent months. Thar, and while the test mule is heavily camouflaged, there seems to be a kink in roof.

The 5- door Thar could have the 2.0-littre petrol motor and the 2.2 – Littre diesel motor in the same configuration as offered with Scorpio-N. This means 172 Bhp-420Nm for the 2.2 diesel engine’s manual variant and 172 Bhp-460 Nm for the automatic variant.

Kia motors Unveiled Kia Seltos at the ongoing 2022 Los Angeles Auto Show. Now 2023 Kia Seltos are unveiled for the Us market. It gets some cosmetic changes and functions updates. A new X-Line variant will also be available in the US market. With the new 2023 Kia Seltos users can access new tech features and it also gets new safety features and performance boost. Price are expected to be announced at the time of launch.

The country’s largest car manufacturers Maruti Suzuki decided to introduce the Indian-spec Maruti suzuki Jimny compact SUV is expected to be unveiled at the 2023 Auto expo, and by launch in mid -2023. Maruti will offer the in three door or five door version of the SUV. Maruti Suzuki has finally started testing the 5-door version of the Jimny SUV on the Indian roads. This is a most awaited car from the Maruti Suzuki almost all India man waiting for this car.

Maruti Jimny is expected to be launched in India in January 2023 with an estimated price of Rs 10.00 Lakh.

Color’s Options And Price In India:

The most popular SUV of Tata Harrier could get an EV version in the Indian market. This will be the first big SUV in the market. Reportedly, Tata started testing the Car in its Plant. It is expected that Tata plans to launch the car in the mid of 2023 in the market.

So, Nissan Qashqai Like the X-Trail, Nissan has started testing the Qashqai in India. Nissan will test the Qashqai rigorously before bringing it to India in 2023. The Qashqai will compete with the Hyundai Tucson and Jeep Compass.

Hyundai had now tested a new generation Verna. Many time we sporte new generation Verna on the road. This car will get more length and also more premium. It could also get ADS and several new features. Hyundai plan to unveil the car at the Auto Expo of 2023.

Maruti also working on the new generation of most popular hatchback Maruti Swift. The car has been spotted testing on the road with several design changes and features. As a report, It get a strong hybrid setup. Maruti could unveil the car in the Indian by the end of 2023.

Hyundai India could also launch the most popular sub compact SUV Creta facelift at the Auto Expo of 2023. This facelift gets a new front fascia design such as new front grille and headlamps set-up and several new premium features and also confirmed that it get ADAS.

Hyundai had plan to launch of Hyundai Ai3 for the rival of Punch. It is comes with EV version. This car will comes with new product based on the place of Santro. It could get several new features.

Kia could also plan in 2023 to unveil the Kia Carnival at the Auto Expo of 2023.The new Kia carnival gets a more premium design and several new features which make it more comfortable and luxury.

Recently, Honda had plan to new product in India market to launched the new WR-V. This new WR-V gets a new design and most new features with is essential. Honda could unveil the car in the second half of 2023. 25 Coming Cars 2023 In India Know Price – Specs

The Citroen automaker has been launched a premium class hatchback The Citroen C3 in Indian market at the price range of Rs 5.71 lakh to Rs 8.06 lakh (ex-showroom Delhi). Officially company called this Sub- compact SUV “hatchback with a twist”. It is come with only two trims ,LIVE and FEEL ,will be offering the 1.2litter petrol naturally aspirated and 1.2liter turbo petrol – engine.

New manufacturers, Citroen is also working on an EV. It is rivals with Tata Punch and Hyundai Ai3 upcoming cars. This Car EV will be an electrified version of the C3. Its car could EV highlights the exterior design and more features. Citroen could be unveiled in the March and April months of 2023.

Ans: Most Popular Cars In India.

Ans: Most Popular Cars In India.