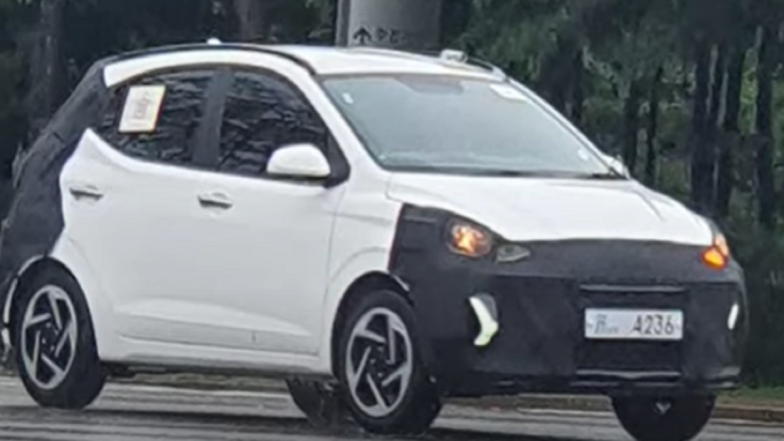 Hyundai Grand i10 Nios facelift spotted testing for the first time in India. The prototype hatchback is partly camouflaged hiding the front and rear profile of the car.

The new model is expected to get some styling changes. The front profile seems to get new set of headlights while the DRLs are integrated in the lower half of the bumper. The front grille looks huge in size some tweaks are there on the bonnet as well.

You can expect Hyundai to offer a new set of alloy wheels. The side profile will remain more or less the same.

While the rear profile is completely camouflaged, you can notice the new tail light design which is partly visible in these spy shots. You can expect mild updates on the bumper too.

The interior is not clearly visible in these pictures but we expect Hyundai to offer some changes on the dashboard design. It might also come with more features to keep the car up to date.

Mechanically we don’t expect Hyundai to make any changes. The same engine options will continue to be offered – 1.2-litre petrol and 1.0-litre turbo petrol.

While the car is currently in its testing phase, the launch is expected to happen by mid-2023. It will compete directly with the new generation Maruti Swift that is also expected to go on sale sometime next year.